I completed my first “mud run” obstacle race yesterday with several friends from the Wildfire Adventures Boot Camp class I attend in Hyattsville.  A mud run is a route between 5 and 10 kilometers in distance with military style obstacles along the way. We ran the Blood and Guts 5K in Centreville, VA, and naturally every T.M.F. in our crew completed successfully.

On Friday afternoon I tried to plan ahead and create a list of what I thought was necessary for the race, both clothing and supply-wise.  I spent a lot of time at the local thrift shop on Friday night carefully selecting only the most strategically shitty active wear. I also came dangerously close to purchasing an Elton John Greatest Hits vinyl record that I already owned but put it back at the last second, so at least that one crisis was averted.

Sometimes you just have to jump in and learn by doing, but I thought that the knowledge I gathered at my first obstacle race might help others prepare. Here for the benefit of my seven loyal readers is my carefully compiled list of what and what not to bring to your mud run.

Learn from my mistakes.

>  The oldest, crappiest workout clothes and shoes you own.  Some items, namely socks, may become casualties of the obstacle race and need to be thrown away.  In most cases your sneakers can be saved, just hose them down once you get home, throw them in the washer after the caked-on muck is gone, and air dry.

>  Weather appropriate clothing.  Once you start running it will feel about 15 degrees warmer outside than it actually is, so try to dress in layers. Yesterday was fairly crisp but the wind chill was so bitter that I could feel my leg hair growing back. I would have been wise to choose pants over shorts but if I had then this article might never have been written, so “you’re welcome.”

>  Your ticket and waiver (if offered beforehand) to save time at check-in. Remember to bring your current license or photo id, so that you don’t end up using the one in the bottom of your gym bag from when you lived in Pennsylvania in 1997, even if you look as young now as you were then. Carry cash to pay for parking and other goodies.

>  Extra clothes (esp. socks, shoes and undies). If it is chilly outside, be sure to pack layers, you WILL be freezing at the end of your race. BRING A CHANGE OF SHOES OR YOU WILL REGRET IT.  You might end up buying ice cream shoeless in Virginia because it is the last weekend that Carousel is open, or you might end up on a farm near Luray buying reclaimed barnwood walking barefoot on mulch and you will be sorry. These are just examples of what could happen if you are not careful.

>  A large towel (for hiding your modesty when you inevitably end up changing in the parking lot/field). You may change in a Port-a-Potty but those of us that fear MRSA would rather take our chances in the field.

>  Trash bags (to hold all of your rancid clothing and for use as makeshift car seat covers).

>  Post-race water and snacks to be left in the car. It is equally as important to hydrate after the race as before.

>  Your asthma inhaler (if prescribed) and a 20 ounce cup of Dunkin Donuts coffee.  If a cocktail of those two items doesn’t have you tearing through the course like a maniac, I don’t know what will.  I also recommend packing some Pepto or Tums just in case, if you are like me and prepared for your race by not working out and eating Domino’s pizza the night before, your internal things might get jumbled about.

>  Your expensive electronics.  I had purchased a runner’s belt so that I could bring my camera, but I was warned that my stuff would still likely be destroyed even in the belt.  I left everything in the car; luckily one of my teammates had a GoPro to capture the event for us. To give you an idea, our 5K included a giant muddy water slide and several pools full of thick red mud, fake limbs and pumpkin guts. What I perceived to be real Zombies (for authenticity’s sake) lurked in the wayside to shoot you with water guns full of blood, and there were many hurdles that made it easy to accidentally fling your iPhone into the funk. So if you think your camera is safe on your person, remember that others may not be aware that it’s there before they douse you with a super soaker.

>  A bulky costume.  Costumes are awesome and many runners wear them, but whatever you wear is going to look crappy by the end of the race.  Your fairy wings will be a tangle and your foam Angry Birds costume will probably become a giant sponge and weigh you down after the first giant mud bath, so plan your outfit wisely. I dressed as a soccer player; pretty generic but it was only $6 at the thrift store and pasty-fair people like myself look sexy no matter what we wear, as is our burden. I would say that the downside was that the stain resistant nature of my jersey prevented me from looking as gamey in my post-run pictures as I would have liked. 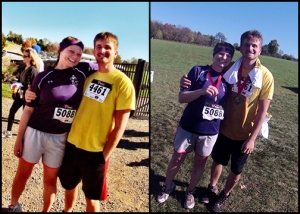 Will I mud run again? Yes.  Will I wear three pairs of underwear next time? Probably. Whatever you end up wearing and whatever group you run with, remember to have fun!  And double up on socks.

I harvested my #garlic today! I planted these in a fabric pot last fall. Feeling proud of my 3 #bulbs. 🧄🧄🧄
Why do my #sunflowers look so scraggly? Every time.
Putting my allergy shots to the test by petting a neighbor cat who demanded a belly rub and some head pats.
I watered a volunteer plant and it gave me some beautiful #flowers in return.
All through the panpizza I fantasized about getting back in the pool, followed by air drying in a lawn chair. YMCA lawn chairs are back, babyyy 😎
Beautiful day at the park today. We broke a toy badminton set with our athletic power.
Chillin with the littlest buddy. 🦎
A white #cicada!
Happy Mother's Day! I'm not a mom but my grandmother gave me some mini #roses for my #garden. Betty said I should have a present anyway. 👍🏼

M.S. Marketing Mgmt GraduationDecember 11, 2016
I did it!
Loading Comments...